Difficulty affects how hard the game will be to play. There are two types of difficulties in Risk of Rain:

The Starting Difficulty is the difficulty that the player can set at the beginning of any game. There are a few differences between each respective starting difficulty:

There are three starting difficulties a player can choose from:

- DRIZZLE -
Reduces difficulty for players new to the game.
Weeping and gnashing is replaced by laughter and tickles.
Progress is not saved in this mode.

Base Health is increased by 50Hp

Heath Regeneration per level is increased by 1.8HP/second

- RAINSTORM -
This is the way the game is meant to be played!
Test your abilities and skills against formidable foes.

- MONSOON -
For hardcore players.
Every bend introduces pain and horrors of the planet.
You will die.

Blighted enemies have a chance to spawn on this difficulty.

The Scaling Difficulty is the difficulty that increases after the start of a game. A scaling difficulty simply means that as time increases, so does difficulty. Represented in a bar on the HUD, every minute increases the enemies’ power and spawn count, developing a great sense of urgency. [1]. There are currently ten named scaling difficulties, starting with "Very Easy" and ending with "HAHAHAHA": 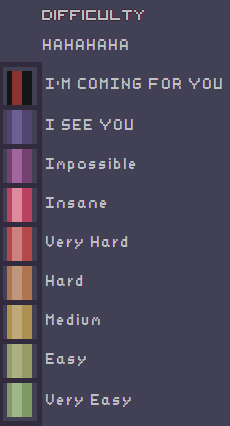 The scaling difficulty does not stop increasing once "HAHAHAHA" is reached, although the bar runs out of room.

Retrieved from "https://riskofrain.fandom.com/wiki/Difficulty?oldid=25544"
Community content is available under CC-BY-SA unless otherwise noted.